The shallow two handled Scottish drinking cup, or Quaich, has a long history within Scotland. Originally a means to welcome and bid farewell to favoured guests, it was widely used by all in the Highlands, from clan chief to crofter.

Meaning of the Word "Quaich"
'Quaich' comes from the Gaelic word 'cuach' meaning cup and is pronounced 'quake', with the "ch" pronounced as in "loch".
Traditional Materials
These shallow bowls with two short handles at opposite sides are traditionally made of wood but when unavailable, stone or horn could be used to equally good effect. As use of metals became more common in the late 17th century, so the quaich came to be made of brass, pewter and silver. A common marriage was carved wood inlaid with pewter or silver. The first metal quaichs were deliberately engraved with radiating lines on the bowls and horizontal rings to represent the withies (wooden rods used to mark tidal channels).


How to Drink from a Quaich
Quaichs have two handles - a quaich should be offered so that the drinker can hold both handles. In so doing the recipient is rendered incapable of using a weapon thus symbolising trust between the drinkers.

Having originated in the Highlands, the quaich didn't become popular throughout Scotland until 1745, when quaichs were carried from the North of Scotland in canteens of the armies of Bonnie Prince Charlie. As a result the quaich was made it as far south as Edinburgh. There are even accounts of quaichs being used in Derby (or indeed now Wiltshire). The quaichs used by the Prince's army were said to have glass bottoms allowing those sipping a dram to keep an eye on what was going on around them in treacherous times.
The Scottish Loving Cup

In a more romantic spirit, some quaichs had a double glass bottom designed to hold a lock of a lover's hair. Each sip taken from such a quaich represented a toast to your love. King James VI of Scotland, on his marriage to Anne of Denmark in 1589, presented her with a quaich or "Loving Cup", as a symbol of his devotion. Quaichs are often used in Scottish wedding ceremonies. Sometimes the newly married couple may hold the quaich for each other while they take a drink to symbolise their love and togetherness or, the couple might pass the quaich around the wedding party to reinforce the love, trust and happiness of the newly weds.Today, many people still offer welcome toasts to their guests using the quaich but most are gifted to those they hold dear, or to celebrate a joyous occasion. They symbolize love, friendship, admiration and respect.
Thank you, Peter. 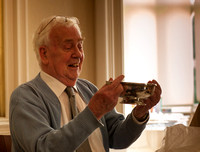 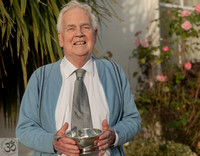 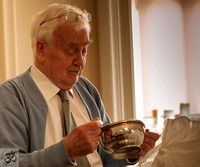