The Tashi Lhunpo monastery was founded in Shigatse, Tibet's second city in 1477 by the first dalai lama. In 1972, it was re-established in Mysore, India. The tibetan longhorn (Dungchen) is commonly played in pairs; the sound is likened to the singing of elephants. The Great Fifth Dalai Lama codified many of the dances in his 'Cham Yig' (Sacred Dance Text), and so ensured their survival. Prior to the dances, the monks meditate and assume the deity they depict (this action in Sanskrit is called āveśa - to enter into or take possession of).
Sha-Ma is the ritual deer and buffalo dance.
Dur dak is the lord of the cemetery dance, reminding us that death is never far away and a universal experience. it translates the tantric concept of dakini (Sanskrit: डाकिनी ḍākinī) derived from a figure from Hindu sacred texts (Bhagavata Purana, Brahma Purana, Markandeya Purana, Kathasaritsagara), a female imp in the train of Kali who feeds on human flesh (her masculine counterpart being called ḍāka ). Dakini and Shakini were the wives of the demon Tripurasura. After Tripurasura was slain by Shiva, they received the boon from Lord Shiva that they could live in the forest without any threat and people would have to chant their names before they could visit the shrine of Bhimashankara. Hence the forest around there became known as Dakini Forest.
In Hindu tantra, Dakini, Shakini, Kakini, Kamini are names of shaktis or powers who control the different chakras. Thus, dakinis come to be seen as "guardians of the deeper mysteries of the self", and it is through them that the secrets of inner transformation are opened. Bakshi are the Tibetan Lords of death.
Taksel describes the tibetan monastic debate.
Sha-Nak is the black hat dance.
Shijoe describes the prayers of dedication. 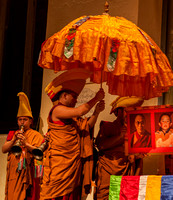 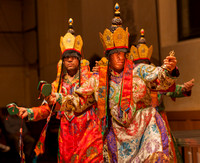 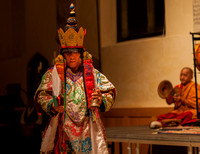 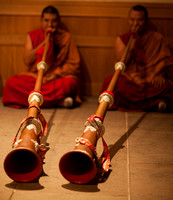 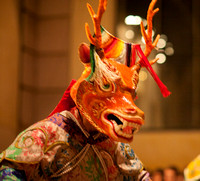 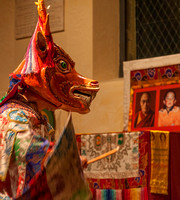