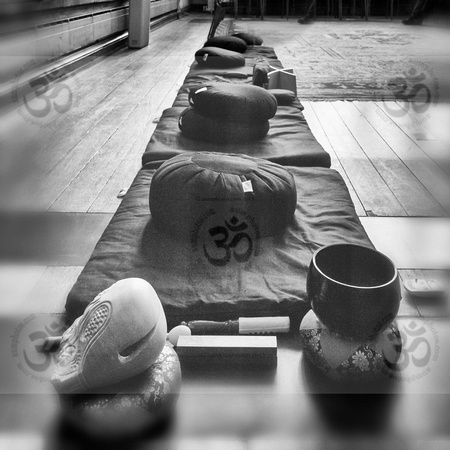 In Zen temples and monasteries, practitioners traditionally sit zazen as a group in a meditation hall, usually referred to as the zendo. The practitioner sits on a cushion called a zafu, which itself is usually placed on top of a low, flat mat called a zabuton.
Before taking one's seat, and after rising at the end of the period of zazen, a Zen practitioner performs a gassho bow to their seat, and a second bow to fellow practitioners.
The beginning of a period of zazen is traditionally announced by ringing a bell three times (shijosho), and the end of a round by ringing the bell either once or twice (hozensho).
Long periods of zazen may alternate with periods of kinhin (walking meditation)
The posture of zazen is seated, with folded legs and hands, and an erect but settled spine. The hands are folded together into a simple mudra over the belly. In many practices, the practitioner breathes from the hara (the center of gravity in the belly) and the eyelids are half-lowered, the eyes being neither fully open nor shut so that the practitioner is neither distracted by, nor turning away from, external stimuli.
The legs are folded in one of the standard sitting styles:

In addition, it is not uncommon for modern practitioners to practice zazen in a chair, often with a wedge or cushion on top of it so that one is sitting on an incline, or by placing a wedge behind the lower back to help maintain the natural curve of the spine. One can sit comfortably, but not too comfortably, so as to avoid falling asleep. While each of these styles is commonly taught today, Master Dogen recommended only Kekkafuza and Hankafuza.
© ॐ Aumphotos
Powered by ZENFOLIO User Agreement
Cancel
Continue