Zen and the Art of Photography II 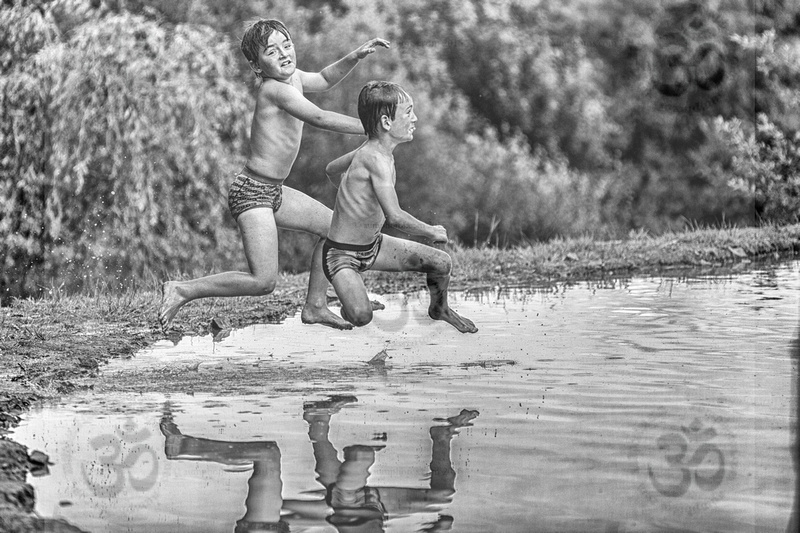 Take a running jump I

The German philosopher Eugen Herrigel (1884-1955) taught philosophy in Tohoku Imperial University, Sendai , Japan between 1924-1929; at the same time he studied Kyudo – zen archery under Master Awa Kenzo (1880 - 1939). He returned to Germany to take up the chair of philosophy at Erlangen. Seven years later he published later he published  "Die Ritterliche Kunst des Bogenschiessens" (The Knightly Art of Archery). This formed the basis of his seminal book Zen in the Art of Archery: Training the Mind and Body to Become One. This short book was influential in introducing Zen to Western audiences in the late 1940s and beyond.

On a simplistic level, it is a guide to the mental and physical exercises to perfect the motor learning required for archery; on a deeper level it is an honest account of one man’s journey to complete abandonment of ‘the self’ and the ego principles that we use to define ourselves. For example, Herrigel describes how he was baffled by paradoxes of being taught that art must become artless, at being taught to aim at himself. Herrigel made copious notes on Zen. After his death, they were edited by his widow, Gusty, and Herman Tausen and published as Der Zen- Weg. They were translated into english, revised by the English philosopher, Buddhist and Episcopal priest, Alan Watts ( 1915- 1973) and published as " The way of Zen" . Watts went to school next to Canterbury Cathedral but trained in Zen in New York ( his mother in law , Ruth Everett Fuller, was married to Zen Master Roshi Sokei-an Sasaki, who acted as his mentor); later he moved to San Fransisco and studied Hindu Vedanta as well as chinese calligraphy. In the revision of " The Way of Zen" , Watts drew on the Indian and Chinese underpinnings of Zen, general semantics ( from the works of Alfred Korzybski (1879-1950; and cybernetics from the early work of Norbert Wiener (1894 - 1964).

The connection between Herrigel's book on Archery and Art and Photography starts with the Fauvist and Cubist painter George Braque (1882 – 1963). Braque’s earliest work was impressionistic but soon became heavily influenced by Henri Matisse, Alain Derain, Raoul Dufy and the other beasts (Fauves); as such he employed colour to depict emotion. Influenced by Paul Cezanne’s work on multiple perspective, Braque’s own work incorporated an interest in the effects of light, geometry and simultaneous persective – the basis of Analytical Cubism. At the age of 26, Braque started a collaboration with Picasso in co-founding Cubism; Picasso had also been influenced by Cezanne. Braque’s still life paintings patterns express an essence of the objects viewed rather than direct representations. A decisive development in Cubism occurred in the Pyrenees in 1911 where Braque painted side by side with Pablo Picasso – they each produced paintings which appear indistinguishable from the other’s.

Braque gave the French humanist photographer Henri Cartier-Bresson (1908- 2004) Herrigel’s book on Zen and archery. Cartier Bresson had studied art and literature at the University of Cambridge (1928-1929). He went to India in 1947, on behalf of Magnum Photos, the agency he cofounded with the war photographer, Robert Capa. the year before the publication of Herrigel’s book on Zen Buddhism and Archery. Cartier Bresson photographed Mahatma Gandhi fasting for peace, leaving Meherauli, a Moslem shrine and on Jan 30th 1948; one hour later Gandhi had been assassinated. Cartier Bresson went on to capture the weeping crowds around Gandhi, Prime Minister Pandit Nehru announcing Gandhi’s death and Gandhi’s cremation on the banks of the Sumna river in Dehli.

Gandhi once said that Shakyamuni Buddha was the greatest teacher of the Hindu concept of ahimsa (non-violence) and that he "taught us to defy appearances and trust in the final triumph of Truth and Love." Not killing is also the first of the five Zen Buddhist precepts. Cartier Bresson took almost half a million photographs; they distilled the chaos of existence into a studied geometry so rich and vigorous that it seemed to foreground simple truths. Clearly  Hindu /  Buddhist ideas influenced Cartier Bresson; he recommended and referenced Herrigel’s book frequently in relationship to how he saw photography. However, Cartier Bresson would have received Herrigel's book from Braque after his interaction with Gandhi - it is tempting to postulate that reflection on Gandhian teaching had already influenced Cartier Bresson. The “inner child” or in Zen the “beginner’s mind” are all exercises designed to return a person to a more supple state of flow. In his book, " The Mind's Eye ", Cartier Bresson wrote about  being able to " sniff the final image" and " To photograph is to hold one's breath, when all faculties converge to capture fleeting reality. It's at that precise moment that mastering an image becomes a great physical and intellectual joy ".

Similarly, just as discipline serves an unexpected purpose for Kyudo, freeing archers from the endless choices that are common place in modern life, the same applies to the master photographer/ artist. Thus, every action is predetermined, except one, the moment they release the arrow. The analogy with photography is obvious, the arrow release is replaced by the camera shutter; Cartier Bresson coined the phrase " The decisive moment ". Zen Archers are all trained to do exactly the same sequences, the same steps, and the same techniques.  What divides each moment is the shot.  It is the record of these small shifts, that translates to a different outcome, for the archer a different score, for the photographer a different image and message.

The image I have shown accompanying this article is entitled “ Take a running jump I “. It shows two boys simultaneously jumping into a lake with great determination. That they have performed this action before and learnt the motor action is shown by how close they are above the water and the synchronous position of their limbs. The water is so still that the reflection of the boys’ legs is clearly seen. A single point in time is frozen; the boys appear to float above the water moments before they are immersed.

At the culmination of this discourse on history, philosophy, politics, neuroscience and art, grounded in ego thought, I respectfully return you, the reader, to the Heart Sutra:

Avalokiteshvara Bodhisattva, practising deep Prajna Paramita,
clearly saw that all five skandhas are empty,
transforming all suffering and distress.
Shariputra, form is no other than emptiness,
emptiness no other than form;
form is exactly emptiness, emptiness exactly form;
sensation, perception, mental reaction, consciousness are also like this.
Shariputra, all things are essentially empty -
not born, not destroyed; not stained, not pure; without loss, without gain.
Therefore in emptiness there is no form, no sensation, perception, mental reaction, consciousness;
no eye, ear, nose, tongue, body, mind,
no colour, sound, smell, taste, touch, object of thought;
no seeing and so on to no thinking;
no ignorance and also no ending of ignorance,
and so on to no old age and death
and also no ending of old age and death;
no suffering, cause of suffering, cessation, path;
no wisdom and no attainment. Since there is nothing to attain,
the Bodhisattva lives by Prajna Paramita,
with no hindrance in the mind; no hindrance and therefore no fear;
far beyond delusive thinking right here is Nirvana.
All Buddhas of past, present, and future live by Prajna Paramita,
attaining Anuttara-samyak-sambodhi.
Therefore know that Prajna Paramita is
the great mantra, the vivid mantra,
the unsurpassed mantra, the supreme mantra,
which completely removes all suffering.
This is truth, not mere formality.
Therefore set forth the Prajna Paramita mantra,
set forth this mantra and proclaim:
Gate Gate Paragate Parasamgate
Bodhi Svaha!

6.. Norbert Wiener  Cybernetics: Or Control and Communication in the Animal and the Machine (1948, MIT Press)